Lost in the Maze 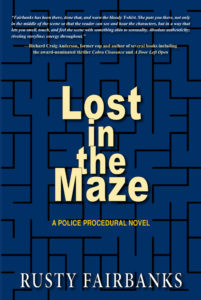 During a Friday night of too much murder and not enough help, Sacramento Sheriff’s detective Susan Edmonds is roused out of bed to “just go sign the paperwork” for release of a body to the coroner’s office. According to the young patrol deputy standing by, Dee Polachek, CSU had come and gone, declaring that the nude female died from apparent natural causes.

Purchase the ebook at Amazon.com